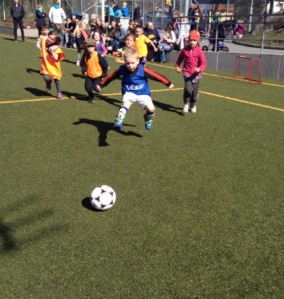 Many young players are perceived to have reached a high level of performance based on their physical abilities not their cognitive abilities. The common “coach solution” to this problem (depending on your view point) is often referred to as ability grouping. But what are we actually grouping? What are our criteria for ability grouping? I have asked this question numerous times while delivering the new Swedish FA coach education courses in the Stockholm district. The early part of this evidence based curriculum is a great introduction for any young trainer or parent to the subject of the child in sport. The UN convention on the Rights of the Child is introduced to the coaches and 4 articles are interpreted from a soccer perspective. It is followed by a simple explanation of the biopsychosocial development of children between 6-12 years of age. This lays a good foundation for discussions on practice design, environment, coaching behaviour, skill acquisition, development and learning. These discussions are encouraged throughout the course.

The most interesting and often the longest discussions evolve around the topic of ability grouping and the early selection process (often referred to as early talent identification). I have already from an evidence based perspective touched on this topic in the blog post “Survival of the fittest or survival of talent”. The Swedish FA is very clear where it stands on this. “From a child’s rights perspective, children are at risk of being subjected to indignity instead of prioritising their developmental needs”.  However away from the moral side of the debate I also like to challenge preconceptions that seem to be based on tradition (we have always done it like this!). This tradition is often something that is deeply rooted in the culture of the club and in my opinion the new Swedish FA coach curriculum wants us to critically analyse and challenge these assumptions.

During these discussions I ask some questions:

Certain attributes are easier to measure than others. Anyone will notice the young player that has a great shot (usually meaning that he/she kicks the ball very hard) or the very fast player. How about the goalkeeper or defender that can kick the ball very far (usually to the fast player J).  What about the young player that is great at dribbling or really good in the tackle? These are essentially the hard skills. They are quantifiable, easy to measure as they are related to a specific task. They are easily evaluated through observation.  All these examples have turned up in the course when coaches discuss how they evaluate young players

This is where I usually take up the example of the importance of 1v1 defending and attacking. We all agree that this is a very important characteristic of the game. Yet if we look at one of the greatest midfielders in the last 15 years we need look no further than Barcelona’s Xavi. Now Xavi is not exactly known for his explosive ability to dribble past a player or even defend 1v1.  I ask the coaches “when you watch Xavi what is it that you appreciate about him “? Always the same answers come up. His awareness, his ability to create space, pass his way out of tight situations (problem-solving), his ability to read the game.

When evaluating our young players how many of these attributes are appreciated, recognised and encouraged? Like all great players Xavi is highly skilled at organising information and action. Do we look to create opportunities in our training sessions for young players to develop and learn these skills?  To emphasise my point I take the example of the young player who is very good in the tackle. Was that player in the right position before making the tackle or are temporary physical advantages covering up a lack of game understanding? In his prime one of the greatest defenders of all time Paulo Maldini made on average of one tackle every two games. Once again, game intelligence, the ability to read the game.

The traits that the coaches associate with Xavi are what are often referred to as soft skills. These are often associated with personal traits, emotional intelligence. Examples of soft skills are problem solving, how players relate and communicate with each other and pattern recognition. These traits can be learned through trial and error. The application of soft skills is more dynamic as it can change depending on the situation. A good example of this is recognising goal scoring opportunities both on and off the ball in various different situations. Development of soft skills also helps when you are confronted with an unfamiliar situation giving you the confidence to attempt to find a solution. This helps develop the player’s flexibility to adapt. Taking the example of Xavi we can see that adaptive behaviour is a trait of high quality players. His undeniable ability to organise information and action often sets him apart from the rest.

Why is a player fast and a great dribbler? Why has another player better coordination and balance making it easier to perform a given task? What opportunities have been afforded to these players? Have they older siblings that they have played with since it was possible for them to kick a ball? Has their immediate environment provided them with opportunities to play?

So if our early practice environment only supports those that adapt through the use of hard skills then maybe those that have potential to adapt in the long run may well be lost to us forever.

Many kids are perceived to have reached a high level of performance based on their physical abilities not their cognitive abilities. Therefore it is quite common and understandable that we allow hard skills to influence our early player evaluation process. If we understand what we are looking at then maybe we can readjust the parameters of how we work with a group of young players.