Skip to content
HomeWe take responsibility for “WHAT” but the concept of “HOW” the players must themselves fill with life.

There is an old Irish tradition of going “Ag Bothantaiocht”, where people would go from house to house in search of stories, songs and craic. In my own digital version of “Ag Bothantaiocht” I have revelled in visiting some assorted virtual “story houses” as I eavesdropped on some fascinating stories and exchanged learning experiences. This is part-one of a series of blogs that I will publish on the theme of helping someone become their own learner (yes I went “”Ag Bothantaiocht” with Mark Upton and Al Smith) and no better way to start than with a story.

We take responsibility for “WHAT” but the concept of “HOW” the players must themselves fill with life.

Every Thursday Dennis Hörtin and I take a session with a group of 10/11 year olds. As with many groups at this age the level of ability, interest, concentration and reason for being there differs from individual to individual and fluctuates over time. We started with this group in April. We would arrive 15 minutes before the session to find that most of the kids were already there. Many had come directly from school. Some would just stand around waiting and chatting to each other while others would play a shooting/goalkeeping game that they had devised.

Every session from April to October has been implemented using a game centred approach. A concept less based on instruction and more on “supporting learning”. Our ambition is that all learning takes place in context. (Coaching in Context- In context of the game and in context of the needs of the child) We devised and evolved games around 7v7, 5v5, 4v4, 3v3, 2v2, 1v1, 6v4, 4v2, 6v3 while always trying to include and respect the principles of the game. These include for example width, depth, movement (both on and off the ball), positioning to receive the ball, variation in collective positioning.

.“The best decision-makers in sport adapt their decisions and actions to a changing environment, and perform in unstable or uncertain situations. Coaches need to emphasise adaptability and variability in training, rather than the traditional approach that focuses mainly on repetition and stability of athlete decisions and actions”. – Richard Shuttleworth

Since the summer break both Dennis and I have noticed some very interesting changes. Now, when we arrive the kids are already there and have divided themselves up in two teams and are playing a full on game. We observe for a while and let them play. Then we just step in and create some rules or constraints and allow them to continue with the game. After 15 min we will have a discussion with the young players and maybe further manipulate constraints (time, space, players) depending on where the learning and enjoyment is going. We take responsibility for “WHAT” (structure), but the concept of “HOW” (variability) the players must themselves fill with life.

Game Example: Many young players will meet the ball facing their own goal and turn directly, often in to an opponent or turn away from the space that would have provided the better attacking option. We devised a simple game to work with the player’s body positioning to help develop perception action coupling. We used a 5v5 and 7v7 game structure with a very simple rule. If you receive the ball facing your own goal then you have only one touch. With time the young players started to adjust their bodies to “open up” to the play. They started to become more aware of when they were closely marked or when they had time and space to continue with the build-up of play. We also discussed (questions/guided discovery) with the young players how deliberately playing a pass to a marked player facing his own goal can be used to provoke a reaction from their opponents. The game we ended up devising for them went something like this.

What we are interested in is how the player reads and responds to the ever changing dynamics of the game, the organisation of information and action through perception and decision making and the flexibility to adapt to changing circumstances through high quality adaptive behavior. At the heart of this is an understanding that skill is the technical and tactical dimensions of the game working together as complimentary pairs. Skill development is an ongoing learning process of adaption.  As Nick Levett said in a previous blog we want our young learners “to recognise the local and global picture of the game where they can use their skill by finding and adapting the right techniques to solve the problem”.

We take responsibility for “WHAT” (structure), but the concept of “HOW” (variability) the players must themselves fill with life. 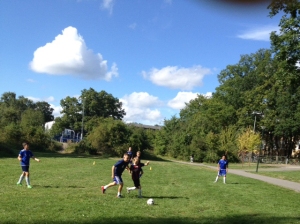 13 thoughts on “We take responsibility for “WHAT” but the concept of “HOW” the players must themselves fill with life.”