The best decision-makers in sport adapt their decisions and actions to a changing environment, and perform in unstable or uncertain situations. Coaches need to emphasise adaptability and variability in training, rather than the traditional approach that focuses mainly on repetition and stability of athlete decisions and actions. Richard Shuttleworth: Decision Making in Team Sport (Sports Coach Vol 30, No 2, Pages 25-27; 2015 )

Design a task that simulates an aspect of the performance environment

A coach can design training that simulates competitive stress by manipulating the task so that the players must continuously adapt their solution. In this game each team needs to adapt their attacking and defensive strategies and patterns by making decisions based on time constraints. 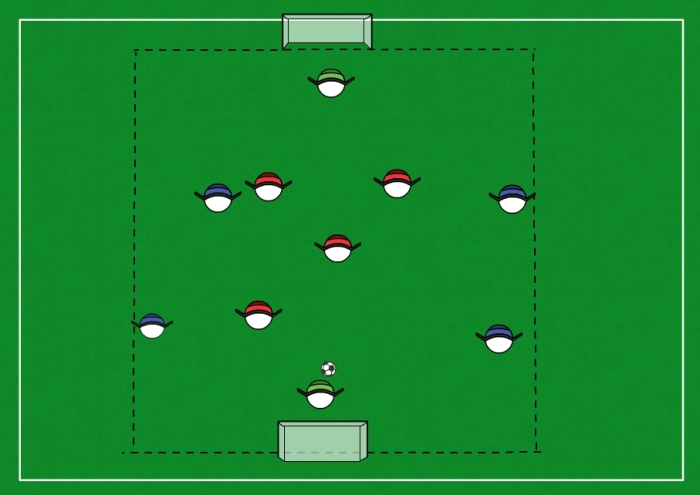 This is a game that I have used with kids between 10 and 13.

I usually play 5v5 or 4v4 and with goalkeepers.

The rules are simple

If the red team score first

How does each team behave before and after a goal is scored?

What decisions emerge depending on the state of the game? Do individuals show courage by choosing to keep the ball by passing their way out of pressurised situations? Or by being patient and creative when they are losing 1-0 and the clock is running down?

What principles of the game become most essential for each team after a goal is scored?

Example of principles of the game: Width, depth, movement (both on and off the ball), positioning to receive the ball, variation in collective positioning, support, progression, possession, delay.

How can each team, depending on the state of the game generate uncertainty?