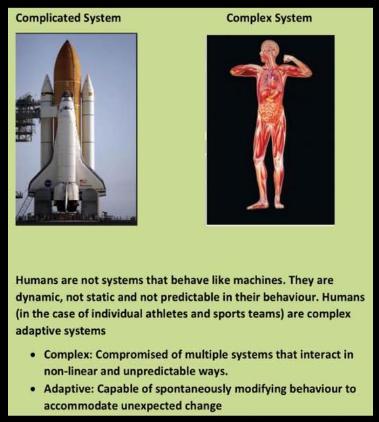 Traditionally we have been treating all systems like independent mechanical systems. We tend to reduce them to simplified sequential models. In a recent conversation with James Vaughan (TwitterTwitter) we discussed if we were creating environments that were more suitable in helping machines reach their potential rather than human beings? Humans unlike computers are synonymous with error. Predicting the future behaviour of a complex system (human, team) can be quite futile. Yet we still feel the need to develop a perfect algorithm, formula or model that can be applied with production line efficiency in attempt to forecast the future? This seems to have been absorbed in to the language of child/youth development within many sports organisations. Clubs describe their child/youth system as a talent factory or refer to players as products that have rolled off their talent conveyor belt. On closer inspection, we often see that the collective of successful senior players clearly emerges from frequently repeated procedures of selection and de-selection across all age stages rather than a long- term continuous nurturing process of player education and development.

It is NOT possible to predict everything that will happen by just knowing the existing conditions and projecting those into the future. So, are management principles, models and structures sold in as ‘common sense’ yet seem to only enhance efficiency in non-complex projects having a negative influence on the potential of young people? Many models are put forth as examples of how things should be done, inevitably influenced by a range of confirmation bias and hindsight bias. John Stoszkowski sums this up in a simple turn of phrase – “By trying to reduce this complexity to simplified models or rules, the complexity is lost, and the model is therefore as useless in explaining things”.

Our ongoing search for simple relationships that are easily and logically understood has created many optical illusions. The Standard Model of Talent Development (SMTD) and its apparent success as discussed in a previous blog is one of these. (Bailey, R.P: & Collins, D. The Standard Model of Talent Development and its Discontents, Kinesiology Review, 2, 248-259). Select some eggs. Put eggs in a plastic bag. Throw the plastic bag at a wall. Show the world the egg that doesn’t break – The system works! (see here)

Like John Kiely (Twitter) said in a recent interview “Talent is the graveyard of evidence. Nobody looks at the dead bodies”.

Despite 35 years of evidence against, learning styles still echo through the corridors of many of our sports education institutions. It sounds logical, it makes sense and and it gives the illusion to the teacher that it will be easier to predict future learning.

By arranging sequential units in “logical” order many models seek to control future outcomes. In skill acquisition if we continue to “logically” reduce a task we decontextualize it and eventually it is not that task anymore. These sort of mechanistic deliberate practice models seem to view the body as a machine, meaning that a certain input will provide a certain output. There is a presumption that human adaption is quite predictable and will follow a determinable path. The focus is to “learn out” instead of creating environments for learners to “learn in”. All this often at the expense of marginalizing the important issue of the complex nature of living systems and their interactions.

“The player is likened to a computer which receives sensory information and acts upon it before producing output” (Broadbent, 1958; Marteniuk, 1976; Eysenck and Keane, 1990).

In sport, particularly invasion sports the metaphor of the computer seems to be programmed into the culture of learning and skill acquisition. Top teams are often reffered to as behaving like machines. The movements of top performers are seen as preprogrammed, often referred to as automised. This logically (that word again) implies that there is less effort required to perform the movement thus freeing up space for the processing of further information.

A common view is that a young player remembers similar situations that they were involved in and use their experience to evaluate and take a decision. The basic, implicit assumption of information processing (IP) is that motor learning and control is the domain of the brain. Learners come to know about their environment by representing it in the mind. Such representation is a result of a computational process involving information received through the senses.

The IP system is divided in to at least 3 levels.

However, as every situation is unique should it not follow that the young player recognises (not remembers) similar situations. In the ever – changing dynamics of the game we recognise the situation and adapt our movement live as the situation develops and unfolds in the environment.

A player might recognise a situation and are conscious of the fact that they have had a similar perceptual experience before. How that player critically interprets the situation and acts will depend on a unique bibliography of movement experiences. How the situation is perceived in terms of their ability to act and/or their understanding of that ability (motivation, Self Determination Theory). “There is no generic movement solution – Skills also have their autobiographies in the sense that they embody the movement experiences of actors up to the moment of performance of the skills” (Body learning: examining the processes of skill learning in dance Richard Bailey & Angela Pickard).

There is no separation of perception and action, there is only perception-action. The learner makes up the content of what is to be learned and is understood within the organism -environment synergy.

This of course should be accounted for when structuring our pedagogical approach and training design. When working with complex systems (players) our training design should be about bringing things (systems) together and not taking them apart. We think in terms of movements not muscles and this implies that movement can be better controlled when the focus lays outside the body rather than inside it.

“…. people’s thoughts, choices and insights can be transformed by physical interaction with things. In other words, thinking with your brain alone – like a computer does – is not equivalent to thinking with your brain, your eyes, and your hands – as humans frequently do”. (Frédéric Vallée-Tourangeau Professor of Psychology, Kingston University & Gaëlle Vallée-Tourangeau Professor of Organisational Behaviour, Kingston University).

To understand motor learning/skill acquisition it can be suggested that we need to understand:

Skill is not a property of the mind. Nor is it a property of the body. If we are going to understand how people learn skills, we need to widen our focus to take in the total field of relations made up of the whole learner and the whole space for learning – Body learning: examining the processes of skill learning in dance Richard Bailey & Angela Pickard

Instead of attempting to predict the future it could be suggested that we look at strategies that can help learners to determine their future. By doing this we are saying that we are willing to adapt as we integrate vast amounts of new complex emerging information. We are willing to embrace complexity.

The future is unwritten.

The Past and Future of Motor Learning and Control:  What Is the Proper Level of Description and Analysis? (Howard N. Zelaznik; Kinesiology Review, 2014, 3, 38-4)-