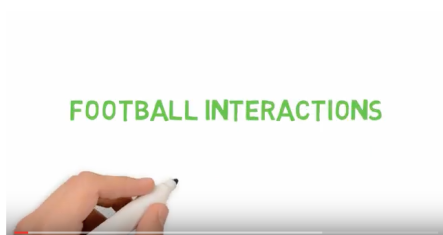 Following on from Coaching the Emergence of Football Interaction (see here)

The concept of football interactions applied in a nonlinear pedagogy can help challenge coaching cultures that separate the player –environment system that has found its way in to the fabric of organised child sport and give us an understanding as to how we can design learning environments in youth football.

Many thanks to Ben Galloway (twitter) for putting this video together

Viewed as a unified complex phenomena Football interactions in youth football, how players coordinate their behaviour in the game with the behaviour of others (social coordination) is an interacting, complex and emerging behaviour that can be considered as an adaptive function and can be captured in the term football interactions (O’Sullivan, Hörtin). Football Interactions (dribble, pass, running off the ball, tackling, closing space….)include all the interactions between the parts of a system. They are complex in the sense that they are the accomplishment of all the (sub) systems involved up to the point of perceiving and acting in the environment. Football interactions are always dependent on circumstances, are historical, cultural, situational and are the players means to utilise affordances on the environment.

One thought on “The Concept of Football Interactions”