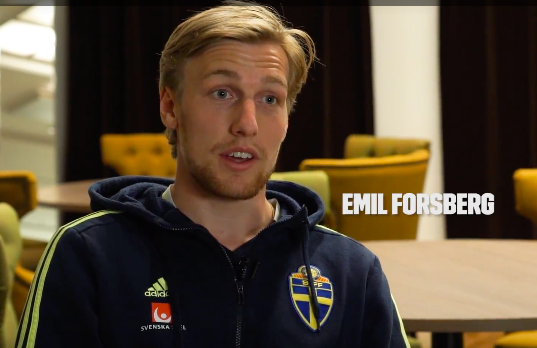 Despite its modest booklet format the new updated version of Spela, Lek och Lär (1) roughly translates as Game, Play, Learn- is very much a central part of the Swedish FA’s new coach education program. The booklet is connected to an online web portal containing some very interesting videos about child-youth football discussing the values that all football in Sweden should stand for. The purpose of this excellent booklet and web-portal is to help promote a common mind-set within all football clubs in Sweden based on 5 simple principles.

One of the most insightful and impactful videos on the web portal is an interview with Swedish International and RB Leipzig Bundesliga player Emil Forsberg. For me Emil Forsberg was a key player in Sweden’s successful qualification for the World Cup. His intelligent and hard- working performance against Italy helped Sweden to defy both odds and critics to deny Italy for the first time since 1958 (ironically held in Sweden) a place at the 2018 World Cup in Russia.

The following is a translated transcript (3) of Emil Forsbergs interview from “Spela, Lek och Lär”. Emils words give us much to reflect on when we consider:

“For 4 or 5 of us (on our street) it was football direct. But it wasn’t just football. We played tennis, table tennis, floorball, ice hockey. In the street I grew up it was mainly ‘sports families’, it became a ‘sports street’ and this is how I got in to sport”.

“Take part in as many sports as you can as long as you can. I think that it is wrong to focus early on one sport. Maybe at 13 you think that Ice hockey is something that you want to focus on but then when you are 15 you may think that despite all the time and effort it was not such a good idea. These days there is a far too early focus on only playing football. I played football and floorball until I was 17 nearly turning 18. I thought it was perfect but maybe not always optimal but I felt that at 17 that football is something that I wanted to focus on”.

I began my career as a professional footballer outside of Sweden quite late, just as I was turning 23. I never really felt stressed, I just thought that is it happens it happens. I live for the day and I think that I must be as professional as possible as a footballer. It should be fun and you should think that it is fun to play football. You shouldn’t stress.

Most importantly children should not stress, leave children be children, be free and again it is very import that they have fun. That is something that I have learned since I was a small child. Have fun, do what you feel is good, don’t let others push you in one direction. You should choose for yourself what you want to do”.