Select some eggs. Put eggs in a plastic bag. Throw the plastic bag at a wall. Show the world the egg that doesn’t break – The system works! 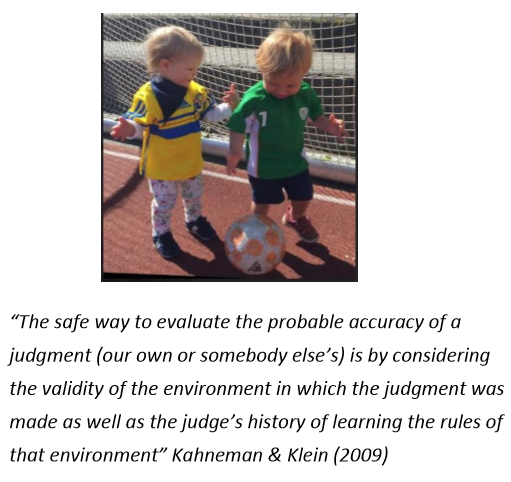 Due to individual differences during the early period of player development it should be viewed as common sense that as a many of these imperfect individuals are given the opportunity to stay in the system as long as possible. It should also be made clear that those who leave a development programme should be made aware of other opportunities within the sport. For instance, a different part of the system such as coaching, administration, leadership, volunteer or research. The system should promote the fact that there are many benefits to society through participation (health, wellbeing, social interaction/integration) or by promoting and supporting participation (promotion of healthy lifestyles, social interaction/integration and general wellbeing). The long term idea of as many as possible as long as possible in the best possible environment often gets viewed through the short term lens of being financially costly to society.  We can reject this assumption when we look at the long term benefits of a healthy population.

It has also been viewed as being costly to the club. There is a fear that if they don’t identify talent early and push available resources towards that talent, then someone else will. A common approach is a talent program based on early talent identification often selling with it the promise of the long term nurturing of that talent.

Recently I saw a tweet where a certain Elite GBO boasted the fact that over 90% of players that had played in the national team at the u17 European championships had come through their elite system. Without reflection this may seem quite impressive and indeed be interpreted as evidence that the system works (if that is how we evaluate a system). Every system will produce an output. On deeper analysis and reflection, we can also argue that there are many shortcomings. The system being referred to is now more or less the only system available (unless you go abroad at a young age). Has it wrestled away other systems that used to emerge naturally to become the only lens through which talent is identified? The system seemingly both physically and emotionally is only meeting the needs of those that satisfy a certain criterion at a certain point in time. Just like Dr Martin Toms said, I too predict that if we colour every child’s hair green then in the future we will have green haired professional footballers.

“We need a flexible framework where our training and planning is designed around emerging information, whilst being underpinned by sound developmental principles” (Mark O’ Sullivan & Al Smith; 2016)

The developmental environment of youth sport is ever changing. Our coaching methods, our curriculum and learning environment (The Learning Space) need to not only be adapted for the development of the individual over time but in some way must respond to the ever accelerating changes in our world, social structures and immediate environment. Many models are developed on the assumption that they can predict and control future out-comes when clearly it is not possible to do this just by knowing the existing conditions. Early “ability” that is identified as talent and used as an indicator of future ability and performance is a common example of this erroneous assumption.

We need to go beyond the information given

In a recent interview Nick Levett (English FA Head of Talent Identification) refers to a conference he attended where someone claimed that they could identify a professional player at 7. Nick’s response to this claim is “Well I can tell you who a liar is. How many people have you said that about and you were wrong?” This is echoed in the article How Systems and Stories Shape Learning by John Stoszkowski (Lecturer in Sports Development & Coaching at University of Central Lancashire). “What you don’t hear in those tales are how many times that scout has thought or said the same thing about numerous other young players who ultimately didn’t go on to make it. Our memory is very selective it seems and, ultimately, it’s only after the fact (with the benefit of hindsight) that we can make such conclusions”.

Much of early talent ID is subjective and as Nick Levett suggests, likely to be influenced by our own view of the world. Perhaps we identify Talent with an unconscious bias and draw our final conclusions by later telling stories (much like the guy at the conference, or that talent scout in twitter) from selective memory.

Arne Gullich (Department of Sport Science, University of Kaiserslautern, Kaiserslautern, Germany) did a study that explored to which extent the development of German professional football players is based on early talent identification (TID) and long-term nurture in talent promotion (TP) programmes.

The central finding of this study is that the TID/TP system in German football is characterised by sizeable annual turnover of its members at all stages.

This clear imperfection in TID or in TP or both is consistent with the findings of Anderson and Miller (2011) from Premier League academies and with observations from various other sports (Güllich & Emrich, 2012).

Conclusion: The collective of successful senior players clearly emerges from frequently repeated procedures of selection and de-selection across all age stages (collectivistic approach) rather than from early TID and selection and a long-term continuous nurturing process within the TP programme (individualistic approach).

Both Germany and Iceland have recently been heavily discussed on all media fronts from the point of view of talent development. In my previous blog, football writer and historian Anton Ingi Sveinbjörnsson gave us an interesting and alternative insight in to what lessons we can take from Iceland.

“I think that the main point is that the investment and the infrastructure and the coaching hasn’t taken away from the fact that sometimes sport is just for the sake of sport”.

Icelandic sociologist Dr. Vidar Halldorsson has done some research in to Icelandic athletes. He gives us some insight in to the complexity of what is being missed by many of these media discussions.

There are no clear cut answers explaining the success of Iceland’s international handball or soccer teams. “It is a complex interplay of customs, culture, environment, groups and individuals. Characteristics of Icelandic athletes: Joy of playing, great team players, ambitious and they always have the belief that they can improve. The explanation for this is not found in our genes but rather in our social surroundings, especially in the athletic environment. According to research elite athletes in our country are ruled by intrinsic motivation rather than extrinsic. That means that the sport itself has value for them, which then encourages values like joy of playing and atmosphere. That in turn has a positive effect on team unity”.

To both paraphrase and quote John Stoszkowski: The German, Icelandic, or wherever else’s models have all been put forth as examples of how it should be done, is inevitably influenced by a range of confirmation bias and hindsight bias. “By trying to reduce this complexity to simplified models or rules, the complexity is lost, and the model is therefore as useless in explaining things”.

We need to go beyond the information given.

Maybe Eduard Schmidt from German tactics blog “Spielverlagerung.de” and “Konzeptfussball” has a point when he said to me in a recent conversation “Germany just using a bigger fishing net”. However, the boat is still the same size!

For an interesting example of analysis and critical thinking check out this great blog post http://learntocoachbasketball.com/on-air-drills-and-negative-transfer

In relation to Talent ID  I would be interested in your thoughts if we applied  analysis and critical thinking to this: